The United Nations Relief and Works Agency for Palestine Refugees in the Near East (UNRWA) has over five million Arab Palestinians registered for services and approximately 1.5 million in 58 refugee camps.  UNWRA defines refugees as “persons whose normal place of residence was Palestine during the period June 1, 1946 to May 15, 1948 and who lost both home and means of livelihood as a result of the 1948 conflict.”  They include all patrilineal descendants as eligible refugees for services. No Jews who lost their homes and means of livelihood during that period in the Judea, Samaria, Jerusalem or Gaza—or their descendants—are now considered eligible refugees.

The issue of refugees and the “right of return” has been one of the major issues in all previous peace negotiations.  Israel is accused of expelling Arabs from Palestine and is frequently blamed for the refugee crisis, but did Israel create the problem?  To understand the issue, it is important to start with a factual, historic background. 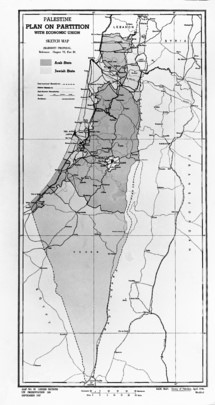 Within weeks of the UN announcement of partition in 1947, approximately 30,000 wealthy Arabs fled to neighboring Arab countries to avoid the upcoming war and await its outcome.  The departure of Arabs from the Jewish lands designated by the partition continued prior to Israel declaring its statehood in May 1948.  50,000 Arabs left Haifa by late April 1948 in spite of Jewish efforts to get them to remain.  Six thousand Arabs left Tiberias under British military supervision in April 1948.  Arabs fled from Jaffa because of mistreatment by Arab soldiers.  When Israel proclaimed its independence in May 1948, the flood of Arab departures from Jewish areas grew greater as the armies of five Arab nations bore down on the Jews with the intention of destroying the Jewish state and securing the entirety of Palestine as an Arab state.

When the Arab armies invaded, more Palestinian Arabs fled their homes.  An Arab nationalist, Musa Alami, described the Arabs as having “one solid hope:  The Arab armies . . . [would] save the country . . . and throw oppressive Zionism with its dreams and dangers into the sea.”

The Arab countries were unwilling to take-in the Palestinian refugees, many of whom they had encouraged to leave Palestine. They were unwilling to provide them a homeland or even a place of refuge or an opportunity to earn a livelihood.  Jordan and Egypt controlled the West Bank (including East Jerusalem and the Old City) and Gaza from 1948 until 1967, respectively.  They allowed squalid conditions to exist in the refugee camps and never made any attempt to create an independent Palestinian state or establish Jerusalem as its capital.  To have done so would have thwarted their ultimate goal of destroying the Jewish State of Israel.

During Israel’s War of Independence and in the aftermath, over 800,000 Arab Jews were either expelled from Arab countries or fled from persecution in those countries.  The Jews living in the Judea, Samaria, Jerusalem and Gaza were either massacred or expelled from their homes without any possessions.  In contrast to the treatment of the Palestinian Arabs by Arab states, Israel welcomed the exiled Jews and approximately 600,000 settled in Israel, not as refugees, but as citizens of Israel, with no compensation from the Arab states from which they were expelled.  Others went to Europe and the United States.

Had the Arab states taken in the Palestinian Arab refugees and granted them citizenship, they would no longer have had the status of refugees and no right to return to their homes in Israel.  It was a political decision by the Arab countries to leave these refugees homeless and let them suffer in the squalor of the refugee camps which, at that time, were all under their control.

In short, Israel neither caused nor created the Arab refugee issue:

The Arab refugee issue was caused by the refusal of the Arabs to accept the United Nations partition plan together with their decision to attack the Jews and attempt to destroy the newly declared independent State of Israel.

Israel expelled some of the Arabs both before and during the War of Independence, but the vast majority left of their own free will or with encouragement from the invading armies.

Jordan and Egypt controlled the West Bank, East Jerusalem and the Old City, as well as Gaza from 1948 until 1967.  They never made any attempt to create an independent Palestinian state nor establish Jerusalem as its capital.  To have done so would have thwarted their ultimate goal of destroying the Jewish State of Israel.

The result is that the refugee problem continues to exist today and continues to serve as an impediment to peace.

*Any opinions expressed in this article are those of the author and not necessarily those of the Jewish Federation of Sarasota-Manatee or of the Community Relations Committee.

Israel as a modern state was founded on the basis of the Zionist dream of the late 19th century, advanced and promoted by Theodor Herzl. For Herzl, Zionism was a nationalist movement for the establishment of a Jewish homeland in the historic land of the Jewish...

CRConnect provides information to help you understand difficult questions we all face concerning Israel and antisemitism.  This post explores something a little different, and talks about the issues facing families with children in the public schools during the month...